Fazeley Junction marked the point where we were both on unfamiliar waters. Cal had travelled the Coventry Canal to this point back in the 1980s but her only memories of it are that it was – well, unmemorable, and also empty. Today it was very pretty in the spring sunshine and far from empty with lots of boats in both directions of all varieties – large, small, shiny, not so shiny, hire boats and historic working boats, steam engines and bolinder engines among them. We knew we should have got up earlier when we reached Glascote Locks in Tamworth at mid-day to find a queue of half a dozen boats waiting to go through.  It took us over an hour to clear the two locks, but the sun was shining, and the company on the towpath and the lock side was good, so the time soon passed.  After a stop above the locks to take on water and a pit stop for supplies in Amington, we headed towards Atherstone.  In contrast to earlier, there was not another boat in sight as we ascended the first two locks of the eleven in the flight, in such a lovely peaceful spot that we decided to moor for the evening rather than continue through the locks into the town.

Thursday morning’s weather forecast showed 0 degrees for Stafford and it felt it as we set off but the sun was out by the time we reached Deptmore Lock. A sign of the times, the isolated lock cottage once accessible only by boat or towpath has a track leading to it from the farm at Roseford Bridge and is undergoing complete restoration. We reached the A34 road bridge at Baswich after a total of about 16 hours travelling; it is on directly the opposite side of Stafford from Norbury Junction and 30 minutes away by car! A little further on, you can see the vestiges of the junction which took the navigation into the centre of Stafford, now subject to restoration proposals by Stafford Riverway Link which would be excellent.

Tixall Wide is a beautiful place I’ve always wanted to stop, but never have either because of wall to wall boats on the moorings or time pressures on the Four Counties Ring. This time we got a prime mooring opposite Tixall Gatehouse, got out the deck chairs and sat out eating bacon butties. This is what boating’s all about. The gatehouse is now a Landmark Trust holiday property.

At Great Haywood Junction we turned right onto the Trent and Mersey leaving behind our familiar territory and the boats we’ve been passing in turn for the last couple of days. Ira has never been on this section and Cal has but more years ago than she cares to admit. Glorious countryside with fantastic views of Shugborough Hall and the Trent Valley. Just as we’d decided we didn’t need to stop in Rugeley we saw two familiar boats and stopped to say hello to Mandy and Paul who we know from Norbury. Then onwards to a stop for the night at King’s Bromley. Along the way we saw lots of bunting and Union Jacks, on pubs, boat clubs and private houses, all decked out for Friday’s Royal Wedding – either there’s been an outbreak of patriotism or its just an excuse for a big party, we suspect the latter!

Sadly for the party animals (and the happy couple) Friday morning dawned cold, damp and grey, an excuse for a lie-in, lazy breakfast, cleaning the boat 😦 and catching up with this blog.  We finally set off at 10.30, the canal was oddly quiet but all suitable mooring spots were full of boats bristling with TV aerials, meaning easy passage through the locks for the rest of us.

Fradley Junction was unnaturally empty, and the sun came out as we got there, so we grabbed the opportunity to moor close to the Wharf and indulge in lunch at the Mucky Duck (The Fradley Swan) – excellent steak and ale pudding!  – before turning off down the Coventry Canal.  Actually, we’ve been on two canals this afternoon without passing through a junction – thanks to turf wars between two canal companies in the heady days of canal building, the Coventry is actually the Birmingham and Fazeley Canal for a stretch up to Fazeley Junction.  Passed lots of parties in canalside streets and back gardens, and bunting everywhere.  Made an early stop for the evening before reaching the urban sprawl of Tamworth, in a nice leafy rural spot disturbed only by trains on the adjacent West Coast Main Line Railway – every ten minutes!

Goodbye Fradley, see you in July

This is Mayflower leaving Gailey Lock behind us, while we stopped for breakfast this morning.  The first of ten locks today.  By the time we reached Penkridge the sun was hot and we succumbed to a beer in the Boat Inn before a quick shopping foray.  The canal is looking beautiful at the moment, trees coming into full leaf, wildflowers and blossom, all shades of green and gold and white.  We ended the day at an idyllic mooring just north of Acton Trussell.  http://canalplan.eu/gazetteer/vo1p?session=ON21562_1

Typical that after days of wall to wall sunshine today turned grey and cold. We left Gnosall soon after 9 this morning, and despite there being hardly a boat in sight up till then we hit the usual queue at Wheaton Aston lock. It was nice to see our old friends Alex (Serenity) and Dave the Duck who were moored there. Not long after the lock Ira was distracted by the sight of a kingfisher which stayed in one place long enough for him to try to get a photo. While he wasn’t paying attention to the tiller, the bow made a bee line for the offside bank and we went aground on the famous Shroppie mud bank. If that wasn’t embarrassing enough, in pulling off (and it was a good job Simon had sold us a top notch new boat pole yesterday at Norbury Wharf!) the boat grounded firmly in its middle on a lump of something mid channel. There we were sat at an alarming angle unable to move back or forwards. Cal’s comments are not for publication but they weren’t favourable to either the bird or the husband. Thanks so much to the crew of Black Prince boat Evie for giving us a tow off, or we’d still be there.

Our chance to play Good Samaritan in return came as we approached Brewood. As we cleared bridge 15 we saw the bows of a narrowboat drifting broadside across the canal in front of us – there was no one aboard and the forward mooring spike had been pulled out of the soft bank (presumably by a combination of a passing boat and a stiff breeze) and the stern looked set to follow. We pulled in and retrieved the stern, then Ira went to the bows with a pole (its second use of the day) to punt her back across. Luckily the mooring spike was still attached to the rope so we were able to secure her as best we could.

After that, it was a fairly uneventful cruise through Autherley Junction and a left turn onto the Staffordshire and Worcestershire Canal until we moored at Coven for the evening. At Autherley we met NB Snapdragon which used to be moored next to us at Norbury until sold last summer, we swapped friendly greetings with the new owners who were loving the boat and off on a long trip to Yorkshire. We also met NB Mayflower, on its way from Norbury with new owner, another happy boater. Very sociable place, the canal!

After spending yesterday saying our farewells to our friends – Lisa came over from Llanfechain to spend the day with us, followed by another entertaining night at the Junction Inn – today was spent preparing for the Great Trip. Last minute jobs (that have been on the “to do” list for months) have been done, and everything has been washed, ironed, cleaned, stowed for three months away – but we’re bound to have forgotten something important! After hours of bank holiday madness, the canal quietened down and at 4.30pm we were finally away, heading in the “wrong” direction to wind at Grub Street Cutting. Pausing only to pick up a hitch hiker (our friend Berni walking back to her boat) we left Norbury Junction at ten to six and made it as far as Gnosall before succumbing to stop for dinner and a well-deserved bottle of wine. At least we’ve left the Junction! 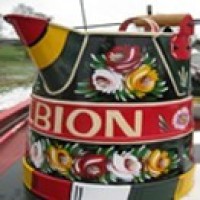 The Wandering Whippersnappers Grandma & Grandad on the road

a view from bridge 38

WordPress.com is the best place for your personal blog or business site.